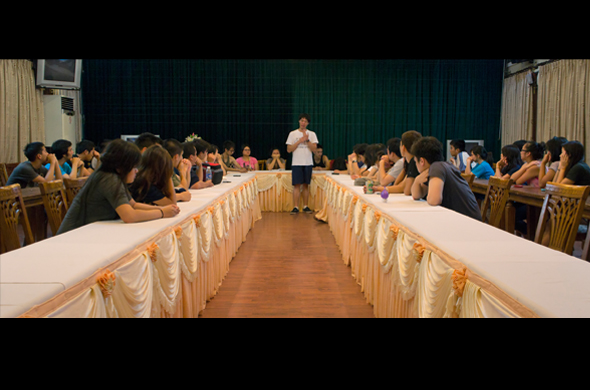 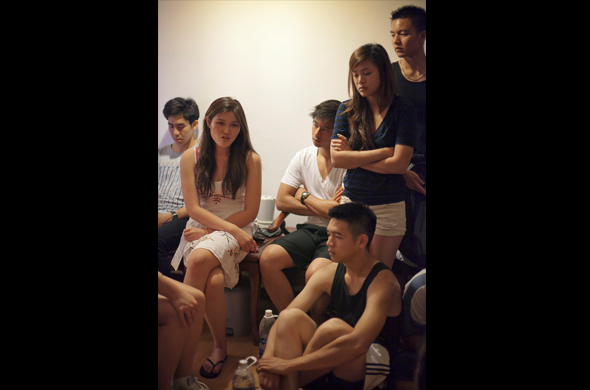 Steven Pham, fourth-year biochemistry student and then-president of the UCLA chapter of Medical, Educational Missions and Outreach, announces that local government officials have shut down the group’s scheduled health clinics outside of Hue, Vietnam. MORGAN GLIER/DAILY BRUIN SENIOR STAFF
After receiving the news that the clinics were canceled, students surround MEMO co-founder Long-Co Nguyen as she explains their other options. MORGAN GLIER/DAILY BRUIN SENIOR STAFF

Denied by local officials, MEMO is unable to carry out its plans to set up clinics in Vietnam

HUE, Vietnam—He couldn’t hold back tears as he stood before the group.

One man’s whim just put an end to almost a year of hard work and planning and Steven Pham had to deliver the news.

The service group’s health clinics had been shut down by the local health minister at the last minute.

Pham imagined some of Vietnam’s poorest people, waiting the next morning for the clinics to be set up by the UCLA and UC Irvine students of Medical, Educational Missions and Outreach. He broke down.

“Our trip, all the people we tried to help with the ultrasound and stuff, that’s not going to happen,” the fourth-year biochemistry student said. “I’m really sorry&madshwe really tried.”

The higher government had given MEMO the green light, to hold the three-day health clinic, but it was the local officials in the country’s central province that took objection.

“Health care is not just about being able to provide the right medicine, it is about politics, as well,” said Long-Co Nguyen, MEMO co-founder and UC San Francisco medical student.

The group was too large and the clinic too small. The college students were not qualified. They weren’t all Vietnamese speakers.

MEMO had a counter to each of the excuses, but in the end, a representative of the local government said the clinics just could not happen.

“We were just trying to go into the area and do what we do – to help people,” Pham said. “I don’t think we’ll ever have the perfect explanation why.”

Before this, MEMO had never been stopped from doing a project; but in developing nations such as Vietnam, service groups are denied permits and access to areas for reasons often difficult, if not impossible, to identify.

While hundreds of service groups operate successfully in Vietnam each year, it isn’t easy to set up work in the region because of a suspicion of foreign influence, said Thu-Huong Nguyen-Vo, a UCLA associate professor of the South East Asian and Asian American studies.

The southern region of Vietnam has increasingly opened its doors to foreign aid, but the central and northern regions remain relatively closed off, Long-Co Nguyen said.

“It’s maddening, the type of thing (service groups) have to navigate,” Nguyen-Vo said.

MEMO leaders said they believe the summer’s turbulent political climate in the Middle East put the central government on edge.

Ho Chi Minh City and Hanoi were the sites of nationalist protests against China’s claim over a disputed island chain in the South China Sea.

While the political context is important, Nguyen-Vo said money plays just as big a role.

Corruption is an endemic problem, often the bane of those who attempt to volunteer or do business in the country, said George Dutton, a UCLA associate professor of South East Asian studies.

In MEMO’s case, the officials offered to accept the group’s medications and put on the clinics themselves.

The college students would be able to observe but not directly interact with the patients, the officials told them.

MEMO chose not to go along.

The students decided they would only provide their services directly so they could ensure no donations were misspent, several group members said.

Nguyen-Vo said that offers such as this raise a red flag, adding that there will be individuals within the local government who benefit monetarily from running the clinics.

“They have to grease the right hand … to make things happen,” Nguyen-Vo said. “That’s how you get things done in Vietnam.”