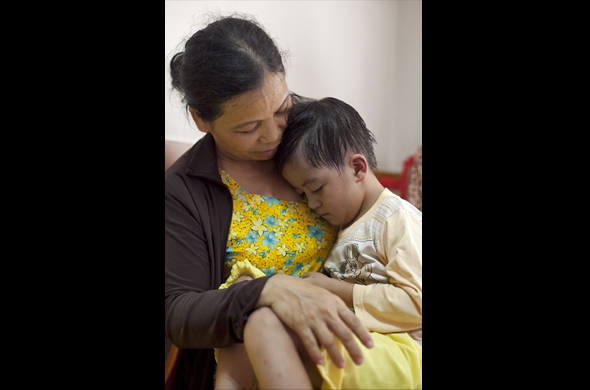 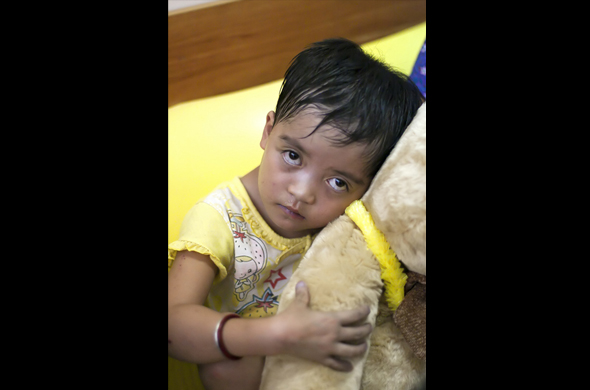 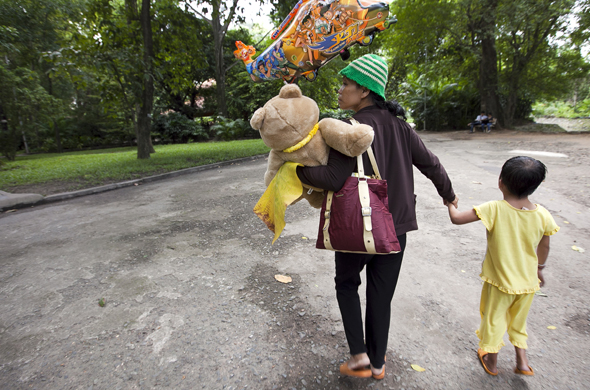 HO CHI MINH CITY, Vietnam—Defeated, the mother stands in the street with her young daughter. “I’d like to go home,” the 7-year-old whispers, her tiny arms clinging to a giant stuffed bear. The mother and daughter had traveled 13 hours by bus from central Vietnam to one of the country’s leading hospitals, only to be sent away by the doctors. Hien Thu Thi Vo’s congenital heart defect would go untreated.

The girl had been waiting days for an ill-fated heart surgery before the doctors determined she was too weak.

At the hospital, the American college students who brought her there hadn’t known her, but all 50 had rushed to take pictures with her. They talked to her in Vietnamese and tried to make her smile.

Outside on the street, her mother, Vui Thi Nguyen, 47, feels the first drops of rain fall and fears the start of one of Southeast Asia’s summer monsoons. It’s time to go.

If fate hasn’t accepted Hien’s situation, her mother has. Without the surgery, her daughter will die.

At home in the Gia Lai province, a region in Vietnam’s Central Highlands, Hien’s family lives in a wooden house with two rooms, a living room and a bedroom for the daughter.

Illiterate, Nguyen works as “a farmer for other people.” Hien’s father has a mental condition requiring monthly medication and cannot work.

One of her brothers is in jail for causing a traffic accident. The other is a farmer who makes about 100,000 Vietnamese dong a day, about $5. In total, the family manages to bring in fewer than $10 a day.

To make matters worse for the family, the government has tightly controlled foreign aid in the Central Highlands in recent years.

Unrest among the Highlanders, an ethnic minority to which Hien’s family belongs, has risen in recent years as the government encourages Vietnamese migration to the area. In some cases, the tensions have come to a violent impasse.

Missionaries converting Highlanders to Christianity have also contributed to a rise in tensions.

All her life, Hien has required monthly hospital visits in the city of Hue. The girl gets tired easily, and her fingers, toes and lips are often blue or purple.

Hien’s chest bears the telltale scar of a previous surgery that failed to correct her condition. With no money, getting another surgery would have been impossible, Nguyen said.

Because of her condition, the doctor forbade her from going to school, Nguyen said.

Before she met Kim, a middlewoman for University of California student group Medical, Educational Missions and Outreach, the family had little hope for their daughter.

Kim, who asked to be identified under an assumed name for fear the government would put a stop to her service efforts here, works with a host of nongovernmental organizations to help the Vietnamese people get the help they need.

“I stay in the background, but I link people together,” she said.

Hien’s circumstances made her an ideal candidate for a sponsorship from MEMO. Every year, their scouts in the country search for potential patients.

This year, MEMO raised enough money to bring two patients, Hien and one other, to University Hospital with the promise of receiving the life-saving surgery from American doctors.

Hundreds lined up outside the hospital entrance, trying to get admitted to what’s known as the Harvard of Vietnam–University Hospital.

Each day, 4,000 patients pass through the hospital’s congested, maze-like hallways.

Patients and families spilled out into an alley that doubled as the ambulance entrance. Some covered their faces with rags to avoid inhaling exhaust and pollution. Inside, even more people lined either side of the hospital corridors.

For years, MEMO has brought American doctors here to train the Vietnamese in advanced surgical techniques and tools.

Before MEMO, laparoscopic surgery at University Hospital was virtually nonexistent. The technique minimizes the size of incisions, lowering the risk of infection and hastening recovery times.

Thanks to the tools MEMO introduced, the hospital has become a leader in medical collaboration in Asia, said Long-Co Nguyen, co-founder of MEMO and a medical student at UC San Francisco.

In the cardiac ward, a dozen children rested two to a bed in the small ward, most with a vertical scar peeking over the collars of their hospital clothes.

Many of them suffered from the same congenital heart defect as Hien. In Vietnam, the disease is particularly prevalent because the rural villagers do not generally believe in preventative medicine, Nguyen said. Such heart defects aren’t any less common in the United States, but prenatal screening allows the problem to be recognized earlier, said Dr. Duy Nguyen, an Orange County surgeon and the father of MEMO’s founders.

Promoting a culture accepting of prenatal vitamins would go a long way in reducing the disease’s rate of occurrence, Long-Co Nguyen added.

The MEMO students first met Hien in a hospital meeting room. She sat in the back of the room beside her mother, lips pursed shut.

She shyly peeked over a table, her eyes big and weary, allowing a faint smile as she fidgeted and grabbed her foot. Her other hand, wrapped in gauze from an IV wound and blue at the fingertips, held her mother’s leg close.

The speaker at the front of the room introduced Hien as one of MEMO’s sponsored heart patients.

She was an instant celebrity.

A cluster of digital cameras clicked and flashed. Her mother beamed.

After the commotion subsided, Nguyen and Hien retired to the hallway.

Nguyen doesn’t know much about MEMO, she admitted.

“They are good people,” she said. “They take good care of my daughter.”

All the mother could do was eat the free hospital lunch – vegetable soup and rice – as they waited for the results of a CT scan on Hien’s lungs to see if she would be fit for surgery. All she was told was that Hien could die if she had the operation.

Hien sat at her mother’s side, her short hair was matted to her forehead with sweat from the humid hallway.

That morning, the MEMO students again arrived at the hospital, this time bearing gifts. A stuffed giant puppy for Hien and a big teddy bear for MEMO’s second heart patient, Quynh Nhu, 11.

Hien sat in tears with her dog, coveting the bear in Quynh’s arms. Her mother negotiated a reluctant compromise between the girls. They would trade toys for the day, but Hien would give the bear back later.

The older girl scowled as Hien sat her first toy upright and fiddled with its yellow collar.

Amanda Tran, a third-year microbiology, immunology and molecular genetics student, sat next to Hien. Asking basic questions, she tried to start a conversation or elicit a smile.

Without a response from the child, Tran suggested a couple names of flowers before finally suggesting naming the bear after Hien.

The child gave a slight nod and said a word Tran could not hear.

Meanwhile, Nguyen grew frustrated. She wanted to hear the results of the CT scan directly from the American doctor.

“I have to accept the truth,” Nguyen said.

She’s used to the situation.

After a number of phone calls back to Kim for updates, Nguyen decided to take her daughter and leave the hospital.

That night they would go to the church and wait for the results.

They’re not Christian, but they would stay in the church, Nguyen said. A nun taught the mother how to pray for the daughter.

“At the moment, I believe in God,” she said.

Meanwhile, Hien was hypnotized by her namesake bear, quietly stroking its arm.

Late in the afternoon, the mother and daughter have left the hospital when the call comes from Kim.

There is no way Hien can get the surgery.

The doctors feared the pressure in her lungs was too high, making for a dangerous situation for the tiny patient.

In her mind, the possibility of getting the surgery is very small, Nguyen says.

“I still have some hope that there will be a chance for my daughter to have the surgery,” she says, maybe lucky circumstances will allow her daughter to get the surgery in the U.S.

As the Vietnamese summer gives rise to a monsoon, Nguyen calls a taxi.

Hien, still clinging to Hien the bear, follows her mother inside the cab, on their way home.

On Aug. 8, a month after the Daily Bruin met Hien, a surgeon at University Hospital agreed to take on her case.

On Sept. 8, the Department of Labour, Invalids and Social Affairs in Gia Lai province approved $4,040 of the $5,500 total cost. MEMO funds will pay the remainder.

Hien was admitted to the hospital last week, but was sent home again because most of the hospital’s surgeons were out of the country at an international seminar.

She was asked to come back the last week of October.